Cyndi started this blog to talk about memories, and food, and food memories, but her food skills are much more advanced than mine, so I’m here to introduce the simpler side (of food, and of memories.)

You don’t have to call me Dr. J, even though I do have an awesome jump shot and a cool hairdo, much like 70’s icon the other Dr. J. (The name came about when an undergraduate class all called me Dr. J, and I made some basketball reference.  They looked at me blankly, and very carefully explained to me that they called me Dr. J because my name starts with J.  They had never heard of Julius Erving.  I felt old.) 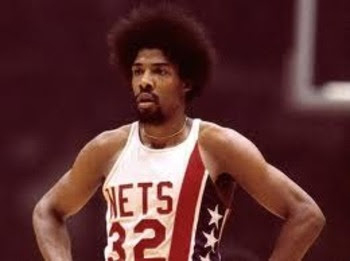 I’ve taken over this blog post to tell you how cooking really works.  Cyndi is a fantastic cook, as you can see by what great shape I’m in.  Hey, pear-shaped is a shape.  But the point is, she’s an excellent cook.  It’s just that real people can’t cook like that.  She’s got what seems like hundreds of spices, and she can somehow know which one to use!  That’s not natural.  I will now bestow upon you all the spice knowledge you need. There are only three spices: salt, pepper, and Tony Chachere’s More Spice.

Here’s how you use them:  let’s say you’ve cooked something.  Like a frying pan of ground beef.  Or some chicken breasts.  Put some of all three spices in there.  Then taste it.  If it doesn’t taste right, randomly pick one of the spices and put in some more.  Repeat until delicious.
Ta daa!  See, cooking is pretty easy.  There are also some advanced skills, like ramen and Hamburger Helper, but I’ll reveal those to you in another post.
I’ll wrap this up by reminding you that Cyndi always makes fun of me for the one time when I was cooking some cut-up chicken breast.  She asked what I was cooking (and in retrospect, I can only assume she thought I was making an ingredient for some complicated Cyndi-type dish.)  I thought it was obvious, so I said “chicken.”  She said “no, I mean what are you making?”  As far as I was concerned, I’d already given a complete answer: chicken. She still makes fun of me to this day.  In my defense, though, I had only put salt on it.  There was no pepper or Tony Chachere’s, which would have made it a complete dish.  …also, I probably would have put it on a flour tortilla, with some cheese (another advanced topic for later.)
So I guess the point, insofar as there is one, is this: enjoy Cyndi’s cooking whenever you can, but don’t worry.  If she’s busy, you and I can have chicken.
-J